The Grade 5 titanium material is mainly in plate. The Grade 5 titanium tube material on the market mostly with high-strength thick-walled tube produced by hot extrusion or oblique piercing. The warm rolling process needs to be improved on the traditional roll, that is, on the pipe rolling mill. 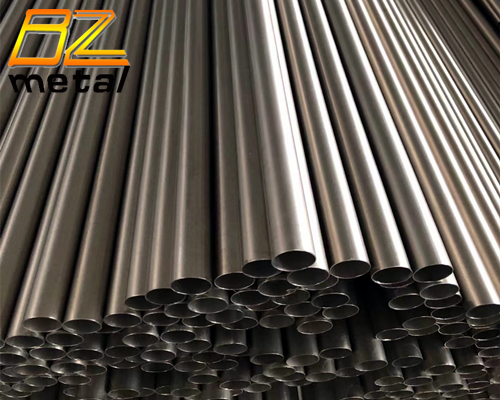 The main reason for this current situation is the high strength of Grade 5 titanium alloy and the difficulty of cold rolling forming.

In order to solve the most important technology of Grade 5 seamless tube cold-rolling forming, a series of researches have been carried out jointly by schools and enterprises.

For example, the direct cold-rolling forming process is used to produce high-strength titanium alloy pipes, which not only greatly reduces the production cost, but meets the requirements for high-performance titanium alloy applications.

The billeting method with different deformations is adopted, and the tube blank is rolled into a tube with a total deformation of 70% after two passes and three passes, respectively. 800℃×1h vacuum annealing is carried out between passes. The cooling method is furnace cooling to 500℃ and then air cooling to room temperature to observe the changes in structure and properties.

In the case of the same total deformation, the more rolling passes, the greater the elongation and hardness of the pipe, and the higher the strength. Good overall performance.

When rolling with large deformation, the flow of material is strip-shaped, and when rolling with small deformation, the flow of material is bundled. When the heat treatment conditions between passes are the same as the subsequent rolling process, the tube with large deformation is billeted. The tissue distortion is more serious. The small deformation billet has little effect on the anisotropy of the pipe; there are certain fluctuations in the anisotropy of the mechanical properties in multi-pass rolling.